There are few names more closely identified with the sandwich industry than that of Nellie Nichols.

Unofficially the ‘Sandwich Queen’ since the early days when she joined Pret, her name has now become a virtual quality food brand. Think Nellie, think innovation, passion for food, quality product and an unbending quest for simplicity.

That unofficial title was formalised when The British Sandwich Industry Award 2009 was bestowed on her at The Sammies – the first time a woman has been honoured with the award. It recognises her long and outstanding career that has also included sandwich manufacturing at Hazlewood Foods (now Greencore’s Park Royal), Pret for the second time and consultancy work for a number of blue chip companies in this sector and the food industry in general.

Her trophy now takes pride of place in her kitchen in her London home, along with a Sunday Times cutting listing her as one of the top 10 most influential women in the food industry out of the 100th most influential women in the country. But don’t think for one moment that her career is now coming to an end – her passionate work continues in the industry; in fact, far from hanging up her developmental apron, she feels her best work is still to come.

While the award sets the seal on an extraordinary career, it brings into focus the fact that, other than one or two prominent sandwich designers, there is a worrying lack of new talent ready to step into her shoes.

It’s to her credit that she has responded to the accolade by launching a free training academy to nurture new sandwich talent (see the panel story on these pages). But much of the problem still lies within the trade, she feels, where would-be developers are being stifled by bureaucracy and design-by-committee culture – so different, she acknowledges gratefully, to the way she was given room to grow by her former mentor at Hazlewood Foods, Anne Truelove, who spotted her creative talents.

The industry has changed enormously since I joined, of course. There are fewer players and they are much bigger.

“The industry has changed enormously since I joined, of course. There are fewer players and they are much bigger. The technical and financial challenges are harder and it is more difficult to develop now – the amount of paperwork involved is obscene. There are plenty of people coming into the industry with science degrees. But if they are going to evolve they must be given the freedom and the space to be able to do it – you can’t develop out of cookery books alone.”

Amazingly, she is herself completely self-taught and probably wouldn’t even get off the starting blocks in today’s qualification conscious sandwich environment. She learned to cook when her mother died when she was young and it became a passion. The same passion for perfection still drives her today, although paradoxically the longer she’s in the business the more she feels that simplicity is the key. The industry has developed enormously since the early days but if there’s still a common fault that undermines a potentially good sandwich, it’s over-complexity, with wonderful ingredients spoiled because of clashing tastes and textures.

“I really think that simplicity is paramount. Just stick to the ground rules – has it got colour, texture and tastes delicious? Throwing in the kitchen sink to ‘add value’ just doesn’t work. It’s become a bit of a cliché but the ingredients have to speak for themselves. You must be able to recognise what you are eating in a blindfold test to be sure it tastes of what is says on the label.”

Just as insidious is the trend towards price-driven sandwiches – cost-engineered baby-food, as she calls it, exacerbated by the drive for value product in today’s straitened times. “It ticks all the boxes in theory, but there’s no colour, taste and texture. The thinking is: the quicker the line and the more efficiently it runs, the more profitable the result. But I think consumer demand is already changing; people are beginning to look for more excitement again. It’s going to be a cautious curve, but it will happen.”

Her path into the sandwich industry was unconventional by today’s standards, but helped to shape her all-round talents. She went to art school with the intention of going into graphic design, but started working in advertising, eventually producing television commercials for companies such as Bird’s Eye Walls. In fact, for those who remember Patsy Kensit running through the pea fields as a child – Nellie was behind it. She also worked in Venice on the famous Cornetto commercials as well as the Bird’s Eye Fish Finger films with Captain Birdseye.

She went on to join Leathams on the wholesale side, working closely on the fledgling Pret A Manger account and was eventually poached by founder Julian Metcalfe to work with him, impressed by her abilities and obvious passion for food. “Nellie has a near perfect palate and is able to work with any facet of food. She also knows when something is right and that counts for a lot,” said a former colleague.

Joining Pret at that time, with just six or seven shops, was an exhilarating experience, at a time when the company was breaking new ground in food to go on a daily basis, paving the way for the industry of today. Strangely enough though, she was initially assigned to an operations role, and by her own admission, completely in the wrong job.

“Anyone who knows me knows that I’m not a number cruncher. I was looking after several shops and struggling with the lack of creativity the role offered me, it was definitely not up my street.”

Julian recognised the problem and moved her into a pure food role setting up a food department, looking after sourcing, systems, recipes, photography and buying and that, as they say, was how it all started.

Initially, there was a major job to be done imposing a degree of system uniformity on a business that was growing fast, and frequently on an ad hoc basis. The shops were all cooking salmon in the mornings to different recipes, for instance, with all the attendant problems of smell. Then there was the developmental work for the rapidly growing number of shops, reaching a total of around 70 by the time she left.

“Looking back, it was a wonderful time and inspiring working for Julian. We were doing everything first and constantly cutting new ground. M&S had developed mass produced sandwiches, but we were pioneering things such as fresh orange juice, sushi and fresh cakes, working with suppliers such as Kate Cherkoff (Kate’s Cakes), who was cooking cakes in her bedsit. There was no such word as no in those days – we just made things happen … I still miss it hugely.” 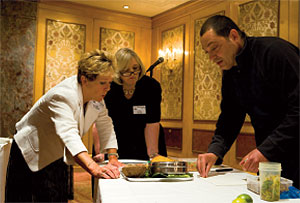 But the frantic development took its toll. Burned out and temporarily bored with sandwiches, she left for food service manufacturing, joining Peter Bartlett at Breadwinner, as it then was, as a consultant. When Hazlewoods offered him enough money to set up a dedicated manufacturing site for Sainsburys it looked as if the relationship was going to be short-lived. But Anne Truelove, then running Derbyshire Chilled Foods (part of the Hazlewood group) persuaded her to stay in a roving capacity, creating the role of ‘Creative Designer’ working on areas as diverse as desserts, ready meals and pizza.

“Anne described me as a free spirit and I suppose that’s exactly what I was and will always remain. Technical directors, who I have always called the sales prevention police, were always saying you can’t do something or other and I would say, ‘Well, that’s what BA want.’ No-one used pepper in sandwich factories in those days. But we found some heat-treated pepper and that was that.”

Curiously though, as has happened at several times during her career, all roads always seemed to lead back to sandwiches. She was instrumental in helping to win the massive BA sandwich business and growing it eventually to a £10m a year account – through Gate Gourmet. She was back at the helm on the sandwich front again.

Like Pret, these were heady days of innovation, breaking new ground on a regular basis. Looking back, one particular range – the Connoisseur – stands out, as it was launched for the new discerning, upmarket sandwich audience, using ingredients rarely used in the sandwich environment at that time. Many readers will remember lines such as Smoked duck breast & caramelised apple with tomato and waffle seed chutney, for instance.

Not all the launches were successful. The Conewich – the cone base with a central sandwich filling like an ice-cream cone, that was supposed to take the industry by storm and whipped up a media storm – fell embarrassingly flat on its face when it failed to sell. She’s philosophical about its downfall looking back, in spite of the fact that she had even sung its praises on the Vanessa Feltz TV show. “I’d like to hear about a Conewich every year – it shows that people are trying new ideas. Some work, some don’t, and this one didn’t. There were also technical issues: it was difficult to package and transport and deposit the fillings. But you always learn something no matter what”

When the opportunity to apply for Head of Food at Pret came up and Julian Metcalfe asked her if she was interested, she couldn’t resist. This was no shoe-in, however, but a rigorous selection procedure, with so many interviews (14 altogether) that the hotel bar where the interviews often took place knew her by name and had her favourite drink ready before she reached the bar.

Julian Metcalfe had taken a back-seat and the company was a very different animal by this time, with international aspirations and more established procedures. When he eventually rejoined to replace managing director Harvey Smythe and refocus the business again, it was like turning the clock back. The dream team was back in business. “We knew each other so well that we knew what the other was going to say.”

Three years later she decided to go it alone and has since worked as a successful consultant, both within and outside the sandwich industry, giving her a mix of interest on both sides of the fence across retail, manufacture and restaurants.

After such a long time in a focused sector, does she feel there’s still room for innovation? Does she still feel the same passion she had when she started out? Surprisingly perhaps, more than ever. “What’s interesting is that there are so many different sandwich influences around the world and I have worked in places as diverse as Norway and Korea. But the market here constantly changes too. There are new ingredients to discover all the time, even now – there are still new taste combinations to be had, such as the new herbs I am growing and working with at the moment. There are other tremendously exciting new products I can’t go into at the moment, for obvious reasons.

“Yes, I’m still passionate about the industry, and particularly about training people. But it’s far from over yet. My peak is a long way off.”